As a Toronto Life Coach I am always open to any new ideas or techniques explaining human behavior and motives.  Anything that can help explain and predict why humans do what they do and can help me be a better coach then I am open to it.  One model I have been using more and more is called Spiral Dynamics.

I first heard about Spiral Dynamics when someone mentioned that this is the model that Nelson Mandela used (along with others) to unite South Africa and avoid Civil War.

When Mandela was imprisoned in South Africa, he read about the philosophy of spiral dynamics as a way to understand the mindsets and values of entire societies. The theories derived from the work of psychologist Clare Graves in the 1970s.

After his release from prison, he used the concept to rebuild his country alongside Zulu tribal leader Mangosuthu Buthelezi and President F.W. de Klerk.  Together they peacefully restructured economic, political and educational systems.  The result was a post-apartheid South Africa that did not devolve into civil war.

What is spiral dynamics?

The basic ideas behind spiral dynamics are:

1) All individuals and societies have values based on experiences, not genes.

2) We can connect around thinking patterns, rather than skin pigmentation.

3) It is more important to understand how people think than what they think.

4) The way a person thinks can evolve in an almost predictable way.

Solving issues of race, class, gender, religion and identity is, of course, complex.  However our values and actions are based on the times and conditions we are in.  There is not a hierarchy of “better.”  All are necessary levels, emerging based on the circumstances of our lives.

The key is to transcend and include, not dismiss, one’s origins.

The model has eight stages but for right now I am only going to discuss the first seven.  Each stage is represented by a color. 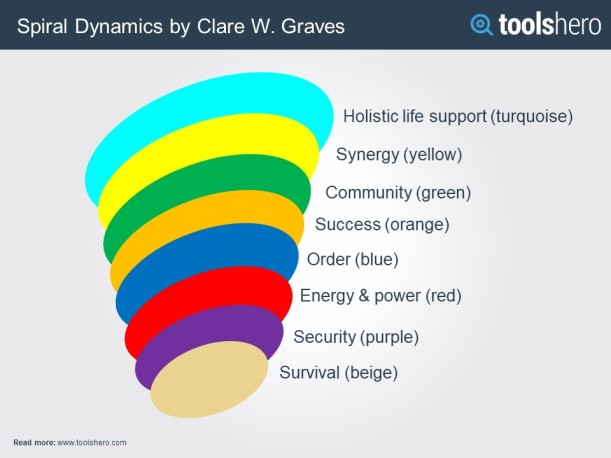 I know it can be tricky to grasp this concept just from reading about it, but the important things to remember are that human thinking/behavior is in direct relation to one’s experiences and conditions, and that it can evolve and be predicted based upon those variables.

A lot of times my Toronto Life Coaching clients will be alternating stages between Blue, Orange, and Green on this spiral dynamic scale.  However most will have a center in which they spend the majority of their life.  The state of mind you’re in and the priorities you value most have so much influence on your overall life.  The need to meet all of these stages is important, but the further up (towards yellow) your center is the more adaptable and capable you will be.  The goal is to be able to move interchangeably throughout this scale when your conditions and experiences dictate.